You are here: Home1 / News2 / bluebird bio Plans Annual Hiring of 100+ for the Next Few Years

CAMBRIDGE, Mass. – Twenty-three-year-old bluebird bio (BLUE) is a unique work environment for scientific and pharmaceutical research that appreciates its own culture over typical corporate structures. At bluebird bio, the drug development teams consistently bring in patient advocacy groups so researchers can remain connected with the end-goal of treatments and remain connected to the patients.

“We know what our impact is on a closer level to the patient. We take what we do very seriously, without taking ourselves so seriously,” Cathleen Mandel, a bluebird bio recruiter said in an exclusive interview with BioSpace (DHX). 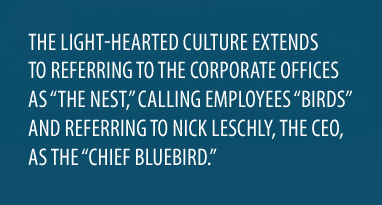 Cambridge-based bluebird bio specializes in treatments for blood disorders and immuno-oncology through the use of gene therapy. In June, bluebird struck a deal with Kite Pharma, Inc. (KITE) to develop T-cell therapies to treat cancer linked to Human papilloma virus (HPV). T-cell receptors are showing promise in boosting the body’s own immune system to combat cancer. In other treatment areas, bluebird’s gene therapy LentiGlobin, a treatment for blood disorders including beta- thalassemia major and sickle cell disease, has been turning heads as preliminary clinical data has shown the treatment to be effective against several forms of beta-thalassemia major. Data released in November shows some of the patients treated with the therapy have not required blood transfusions in several months, something the patients typically underwent on a monthly basis. Likewise, in the spring, bluebird released a report showing a sickle cell patient has been transfusion free with no sickle cell hospitalizations for nearly three months after undergoing the therapy and he is now producing higher levels of hemoglobin.

It’s that type of work and the results it can bring which makes bluebird an attractive place of employment. It’s the type of work environment that can be an attractive opportunity for the serious-minded scientist who doesn’t take himself too seriously, Mandel said. The company maintains a patient-centric focus through its advocacy groups, but also operates in a fast-paced, but light-hearted manner. The light-hearted culture extends to referring to the corporate offices as “the nest,” calling employees “birds” and referring to Nick Leschly, the chief executive officer, as the “chief bluebird.”

“If you want to put up with bad bird puns, you might like working here,” Mandel said.

The company is currently hiring for approximately 50 open positions, but over the past year the company has seen explosive growth with the hiring of 110 people since the beginning of 2015. Sixty people were hired in 2014, Mandel said. The company has plans of hiring approximately 100 “new birds” annually for the next few years, Mandel added.

Since its launch, bluebird bio has approximately 225 employees, including contract workers.

Mandel and Pam Kurtzer, bluebird’s senior employment consultant, said employees at the company are highly valued because they are part of a team effort in developing important therapeutics for serious diseases. Kurtzer and Mandel said that’s one reason for such an intensive interview process—to make sure the prospective employee is right for bluebird and that bluebird is the right fit for that employee.

For those looking to apply to bluebird, Mandel offered several recommendations beyond clean formatting of a resume and tidying up any employment gaps with reasonable explanation. Mandel said candidates looking at bluebird for a possible career need to be able to show off their dedication to science, without any hint of arrogance or hyperbole.

If a candidate is invited to “the nest” for an interview, Mandel and Kurtzer recommend arriving early so the candidate can really get a chance to see what the culture of bluebird is all about.

“If you’re coming in for the interview, we want you to know what a day in the life is really like. For us at bluebird, culture is most important,” Mandel said. “We’re fun and lighthearted. You don’t have to be an extrovert to fit in, but you have to give the culture a chance.”

Life Science Exec Shares Advice: Four Tips for Choosing the Right Resume Ke...
X
We use cookies to ensure that we give you the best experience on our website. If you continue to use this site we will assume that you are happy with it.OK, got itCookies Policy
Scroll to top