You are here: Home1 / News2 / Inside the Biotech Employer&#039;s Head: Job Interview Questions That...

Admiral Hyman Rickover, who was responsible for developing the U.S. Navy’s nuclear submarine fleet, had an infamous technique when interviewing candidates. The chair he had candidates sit in had shorter front legs, and the chair was positioned so sunlight was coming through the venetian blinds directly into their eyes. The result, he said, was to put them off guard and see if they could “maintain their wits … while they were sliding off the chair.” 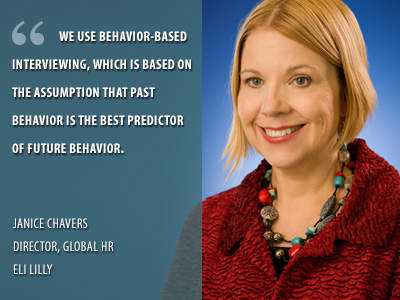 Some companies ask fairly odd questions, or put job candidates on the spot by having them do difficult tasks, like on-the-spot computer programming or writing. One recent example, provided in a recent Glassdoor survey, is or was used by Whole Foods Market to interview for a meat cutter job: Would you rather fight one horse-sized duck, or 100 duck-sized horses?

Behavioral-Based Interviews
Janice Chavers, director of global human resources and diversity communications at Eli Lilly & Company (LLY), says, “We use behavior-based interviewing, which is based on the assumption that past behavior is the best predictor of future behavior.”

Although Chavers didn’t specify these types of questions, this is a common type of approach to job interviews, and common questions include: 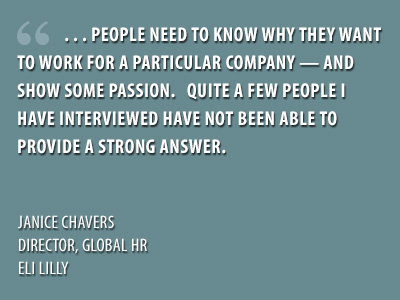 • Describe a situation in which you were able to use persuasion to successfully convince someone to see things your way.

• Tell me about a time when you had to go above and beyond the call of duty in order to get a job done.

• Give me an example of a time when you used your fact-finding skills to solve a problem.

“In addition to those behavior-based questions, I always ask why someone wants to work for Lilly,” Chavers adds. “If I could just offer one tip, I would say people need to know why they want to work for a particular company—and show some passion. Quite a few people I have interviewed have not been able to provide a strong answer.”

Other companies operate on a very case-by-case basis. For example, Angi Calkins, executive director of talent acquisition at Regeneron (REGN), says, “We don’t have top interview questions because we don’t ask set questions across the board.”

She does, however give advice: “Practice interviewing as much as possible.” 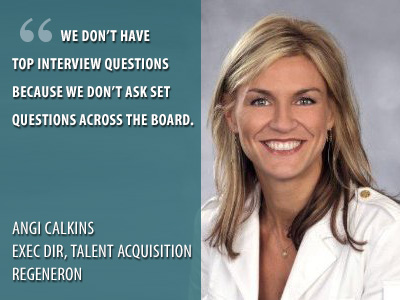 Julia Löffelsend, the media and public relations representative for Boehringer Ingelheim GmbH, notes that the company has a “different approach here that suits our values and corporate culture.”

When pressed to describe that approach, she said, “At Boehringer Ingelheim, we try to be as responsible as possible with the candidate’s time. During the interview, we focus on finding out whether she or he has the necessary skills, the right competencies—and very important: shares our values. To this end, we do not so much work with a set of standard questions, but develop them in a conversation based on the particular profile of the position.”

In terms of the so-called “oddball questions,” Löffelsend said, “Brainteasers or ‘guesstimation questions’ that are more directed at communicating our humor and youthfulness than used for diagnostic value will hardly be asked at Boehringer Ingelheim: after all, we are not a hip startup but conservative in the best sense of the word.”

That’s not always the case. As part of Great Place To Work profile, biotech giant Genentech (RHHBY) wrote, “Interviews at Genentech are primarily composed of competency-based questions with the intention of eliciting answers from candidates that are grounded in their previous experience or how they might react to a particular situation. Our interview process can be rigorous, as we often expect a candidate to interview with many stakeholders to build a complete pictures of a candidate. Technical candidates should not be surprised to receive technical questions in an interview setting.”

Keys To The Interview
Carole Martin now works as The Interview Coach, but before heading out on her own as a consultant to assist interviewers and interviewees, she worked in the human resources department at Sandoz, which is now a Novartis (NVS) company. She is also the author of seven books on the subject of interviewing written for HR staff and anybody facing a job interview, including, “What To Say In Every Job Interview.” 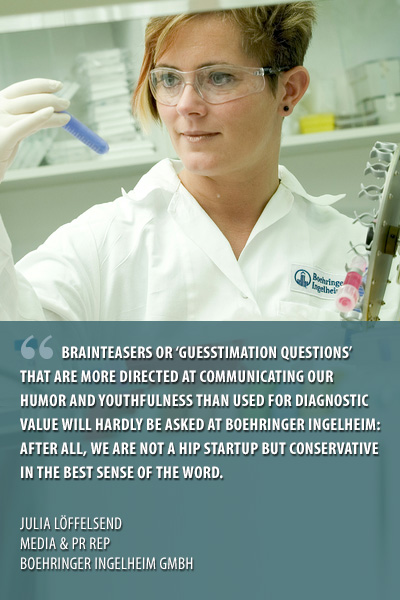 She observes that there are three broad things an interviewer wants to know during the course of the interview. They are:

3. Can the company afford you?

“Do we like him or her and is he or she going to fit in?” Martin says, “but it’s important, because the person being interviewed won’t be happy and the company won’t be happy.”

As Löffelsend, with Boehringer Ingelheim, indicates, fitting into the corporate culture is important. It’s possible that some of these odd questions are designed to evaluate a sense of humor as well as how quickly you think on your feet. (It’s also possible they’re the sort of thing that amuses HR people.)

Martin tells the story of when she worked in HR for an entomologist who was researching insects. “So it was very important this person be into insects. We asked all the right questions, we hired this woman, and she quit after a month. She came down and I asked her, ‘I thought you liked insects. What’s going on?’ She said, ‘I like insects, but these people take pictures of bugs on their vacations. I’m not that into insects.’ So you have to be into whatever your company is doing.”

Recently Martin has been coaching people who want to be FBI agents, and in many cases she’s working with people who didn’t get the job the first time, but have a second chance. “They call me for the second time around and ask for help and I ask them, ‘Did they get to know you as a person?’ And no one has ever said yes. That is a big secret. I believe it’s the same thing: do we like them, is she going to fit in, would we go out for a beer with him?” 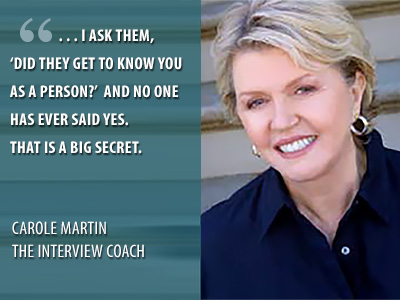 Conclusion
In the life sciences, as for most companies, the key to a successful interview is be yourself, be on time, dress professionally, be enthusiastic, ask questions about the company, know your stuff, do research so you know something about the company, and think about why you want to work for that company. “Because I want a paycheck with a comma in it,” might be the truth, but it’s not really the best answer. Not all companies are a good fit for everyone, so knowing what you’re getting into is worthwhile.

As for fighting a horse-sized duck or 100 duck-sized horses, as a black belt-level martial artist, my answer would be: It’s almost always easier to fight a single opponent than multiple opponents.

5 New Medical Device Companies You Need To Know
X
We use cookies to ensure that we give you the best experience on our website. If you continue to use this site we will assume that you are happy with it.OK, got itCookies Policy
Scroll to top