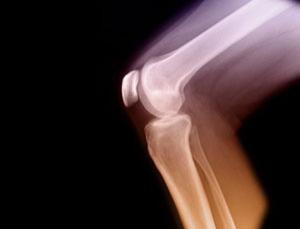 MAGNETS are being used to control the transformation of stem cells into specific tissues. They could also be used to guide stem cells to target locations in the body, allowing arthritic joints and torn cartilage, for example, to be repaired without surgery.

Alicia El Haj of Keele University, UK, and her colleagues have created magnetic beads up to 2 micrometres across that bind to receptors on human mesenchymal stem cells, which are extracted from bone marrow or fat tissue. When a magnetic field is applied, the beads move, deforming the surface of the cells and forcing open its pores. The resulting influx of potassium ions sets in motion a cascade of reactions inside the cell that determine what kind of tissue it will turn into (see diagram).

The team implanted human mesenchymal stem cells studded with these beads into the backs of mice and used a magnetic field to turn the cells into cartilage, El Haj told a stem cell meeting in Oxford, UK, on 7 April. Her team now plans to treat knee joints in goats with the magnetic stem cells, which were developed together with Magnecell, a spin-off company of Keele University. They hope a magnetic field will guide the stem cells to the joints, as well as prompting their transformation into cartilage.

The beads, which the US Food and Drug Administration has already approved for use as an imaging enhancer, degrade after a short time and the harmless products are excreted. By attaching the beads to other receptors, the stem cells might be made to turn into a range of other tissues, El Haj says. 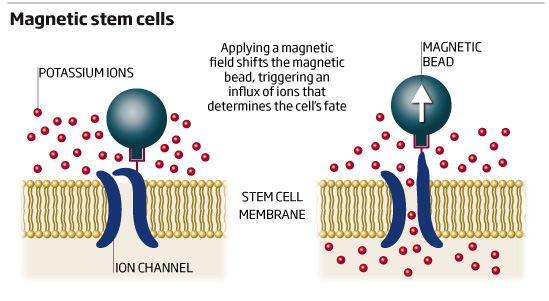 We Don&#039;t Do Careers
X
We use cookies to ensure that we give you the best experience on our website. If you continue to use this site we will assume that you are happy with it.OK, got itCookies Policy
Scroll to top