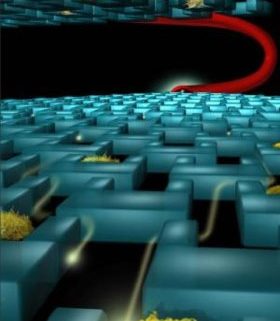 Scientists have detected previously unnoticed chemical signals that individual cells in the immune system use to communicate with each other over short distances.

The signals the researchers detected originated in dendritic cells – the sentinels of the immune system that do the initial detection of microscopic invaders – and were received by nearby T-cells, which play a number of crucial roles in the immune system, including coordination of attacks on agents that cause disease or infection.

The chemical signals cells exchange when they come into contact have been studied extensively. But it has not been possible to detect chemical messages that travel between cells that are nearby but not in contact – called paracrine signals – because they are highly localized and they are produced in concentrations that have been below detection levels. A new technology, called a multi-trap nanophysiometer, was required to demonstrate the existence of non-contact signaling. This is one of the first microfluidic devices that has been applied successfully to the study of cell-to-cell signaling in the immune system.

A detailed description of the multi-trap nanophysiometer (MTN) and how it enabled the accidental discovery of paracrine signaling has been published online by the Lab on a Chip journal. The new device was developed by a team of researchers at the Vanderbilt Institute for Integrative Biosystems Research and Education headed by John P. Wikswo, the Gordon A. Cain University Professor at Vanderbilt.

“This is an important advance and potentially very useful technology,” says co-author Derya Unutmaz, now an associate professor of microbiology at New York University’s School of Medicine. “The ability to study the behavior of single cells may not be as critical if you are studying the heart or muscles, which are mostly formed by uniform cells, but it is crucial for understanding how the immune system functions. The wide surveillance of the body that it conducts requires extensive communication between dozens of different kinds of immune cells.”

Scientists have been trying to develop systems for single-cell analysis for a number of years. Because of the difficulty of keeping normal cells alive, they have been forced to use cells that have been genetically altered so they can be cultured indefinitely. Although the alteration “immortalizes” the cells, it also significantly limits their usefulness. The MTN is the first system that can monitor biochemical changes in large numbers of normal or primary cells at the single-cell level for prolonged periods, Unutmaz says.

The new device consists of a series of hair-sized channels molded in a special kind of plastic that is glued onto the bottom of a glass microscope coverslip. A shoebox-sized pump pushes fluid (normally the media used to culture cells) through one channel that opens up into a chamber filled with hundreds of tiny, three-sided wells small enough to trap individual cells. When cells are injected upstream, they are passively trapped in the wells and are held there solely by the fluid flowing out even smaller holes in the well bottoms. By precisely controlling the flow rate, the researchers can keep normal cells alive for longer than 24 hours.

The researchers monitor the cells with a digital camera attached to a standard microscope, typically snapping images every 30 seconds. They have written software that allows them to analyze the movements and reactions of individual cells. They can record various cell behaviors by injecting different fluorescent dyes into the cells. For example, when naive T-cells are primed for an immune response, the concentration of calcium ion in their cytoplasm jumps up. So when the cytoplasm contains a dye that fluoresces when it comes into contact with calcium, it glows brightly enough to be easily detected.

The surprise discovery of paracrine signaling was made by graduate student Shannon Faley, now a postdoctoral research associate at the University of Glasgow, Scotland. She filled up a nanophysiometer chamber with naive human T-cells and then added mature dendritic cells. She was looking for evidence of T-cell activation when the T-cells and dendritic cells were trapped in the same well and came into contact. This contact is part of the process that allows dendritic cells to convey information about potentially infectious invaders to the naive T-cells, which can then begin dividing to produce an army of effector T-cells custom-designed to attack the invaders.

Faley saw what she was looking for, but she also noticed something unexpected: some T-cells that were trapped in wells downstream of those with dendritic cells, which had never been in direct contact with them, were also lighting up. “My reaction when I saw them was, ‘What in the world is going on?'” she says.

“At this point we don’t know what this factor is or what its function is,” says Faley. According to Unutmaz, a logical function for this signal would be to attract T-cells to dendritic cells that have important information to give them. This supposition is strengthened by the observation that immature dendritic cells don’t produce this factor but mature immunogenic dendritic cells – those that have encountered a pathogen or danger signal – do.

When Faley tried to duplicate this result using standard immunological techniques, however, the result was negative. The standard method consists of growing a culture of dendritic cells in a culture flask, adding T-cells and looking for a reaction. If the cell density is too great, the cells begin poisoning each other, run out of food and die. So the standard practice is to keep the density at a low enough level that the cells remain healthy when the cell media is changed daily.

“This represents a dilution factor of 100 compared to the nanophysiometer,” says Wikswo. “So the factor produced by the dendritic cells was too dilute to activate the T-cells.” It wasn’t until Faley redid the standard test with cell densities 10 times higher than normal that she got the T-cells to activate.

“This represents one of the advantages of the nanophysiometer; it suspends cells in extremely small volumes that are much closer to what they experience in the body and uses slow fluid flow to keep the cells alive,” Wikswo says.

Not only is this capability important in improving our knowledge of how the immune system works, but it may also be the key to understanding why the system fails, as it does in cases like cancer and HIV/AIDS, says Dana Marshall, associate professor at the Meharry Medical College. She and the Wikswo group have submitted a proposal to use the technique to study triple-negative breast tumors, one of the most deadly forms of breast cancer.

“The ability to look at the signaling among cancer cells and immune cells is extremely powerful,” Marshall says. “According to the evidence, the immune system tries to suppress tumor cells but it fails to do so. It is not clear why it fails. If we can figure that out, then we should be able to develop more effective treatments.”

In addition, the multi-trap nanophysiometer could provide a better way to identify the most effective forms of chemotherapy to use for each individual, Marshall suggests. There are enough cells in a typical biopsy to load one chamber with tumor cells and a second chamber with immune-system cells from a patient, subject them to different chemotherapeutic agents and see how the two groups of cells respond. “Often, when therapy fails, the tumor responds to a chemotherapy treatment for a period of time and then it stops. This approach may let us figure out why that happens,” Marshall says.

The research was funded by grants from the Defense Advanced Research Projects Agency, Air Force Office of Scientific Research, the National Institutes of Health, the Vanderbilt Institute for Integrative Biosystems Research and Education and the Systems Biology and Bioengineering Undergraduate Research Experience.

What Should Labor Day Really Mean?
X
We use cookies to ensure that we give you the best experience on our website. If you continue to use this site we will assume that you are happy with it.OK, got itCookies Policy
Scroll to top