You are here: Home / News / University of Arkansas Researchers Use Nanowires to Develop Neural Probe... 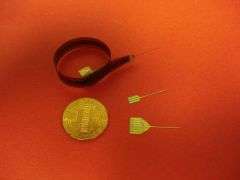 Findings of the project were published in Nanotechnology 2008 and will be included in an upcoming issue of IEEE Transactions on Biomedical Engineering.

The neural probe, made of gold and iridium oxide nanowires grown vertically on a polymer or titanium substrate, will improve the function and reliability of neural prosthetic devices. It has also displayed superior biocompatibility and mechanical strength compared to similar silicon structures.

“Our goal is to develop functional systems that can simultaneously stimulate nerves or muscle cells and record physiological changes in the human body,” said Hargsoon Yoon, research assistant professor in the College of Engineering and lead researcher on the project. “Our approach can minimize cell damage and even provide higher electrode efficiency than commonly used electrodes.”

The research team, based at the university’s Center for Wireless Nano-, Bio- and Info-Tech Sensor and Systems, developed probes that integrate free-standing, “hetero-structured” nanowires. Hetero-structured means the nanowires have an inner core and outer layer. Made of gold, the inner-core nanowires were grown vertically on titanium and polymer substrates. The outer, functional layer, made of iridium oxide, provides charge storage capacity for neural signal sensing and stimulation.

Because storage capacity is directly related to density of electrical current needed to stimulate nerves and muscle cells, the probe can transfer charge into biological cells and tissues using less voltage – and less battery power – and thus can operate longer with less tissue and cell damage.

“Electrodes with low-charge storage capacity require higher stimulating voltage levels,” Yoon said. “It is this higher voltage that can damage biological tissues and the electrode itself.”

Yoon collaborates with Vijay Varadan, distinguished professor of electrical engineering and director of the university’s High Density Electronics Center, to develop a system that will include nanowire electrodes, wireless communication and a power source for bio-packaging. The wireless network will facilitate closed-loop dynamic adjustments of the system and continuous monitoring of patients during stimulation.

Provided by University of Arkansas

The Rise of the Privileged Worker
X
We use cookies to ensure that we give you the best experience on our website. If you continue to use this site we will assume that you are happy with it.OK, got itCookies Policy
Scroll to top